There’s this band from Gothenburg, Sweden, called FREAK KITCHEN. Led by vocalist/guitarist/composer extraordinaire Mattias IA Eklundh, they play some kind of hard rock in their own weird, twisted and fantastic way. Maybe you’ve never heard of them, and I wouldn’t be surprised as their fame is far lesser than it ought to be. What you need to know is that they are totally awesome, and they certainly qualify among the best things in life (running with the blog theme here.) 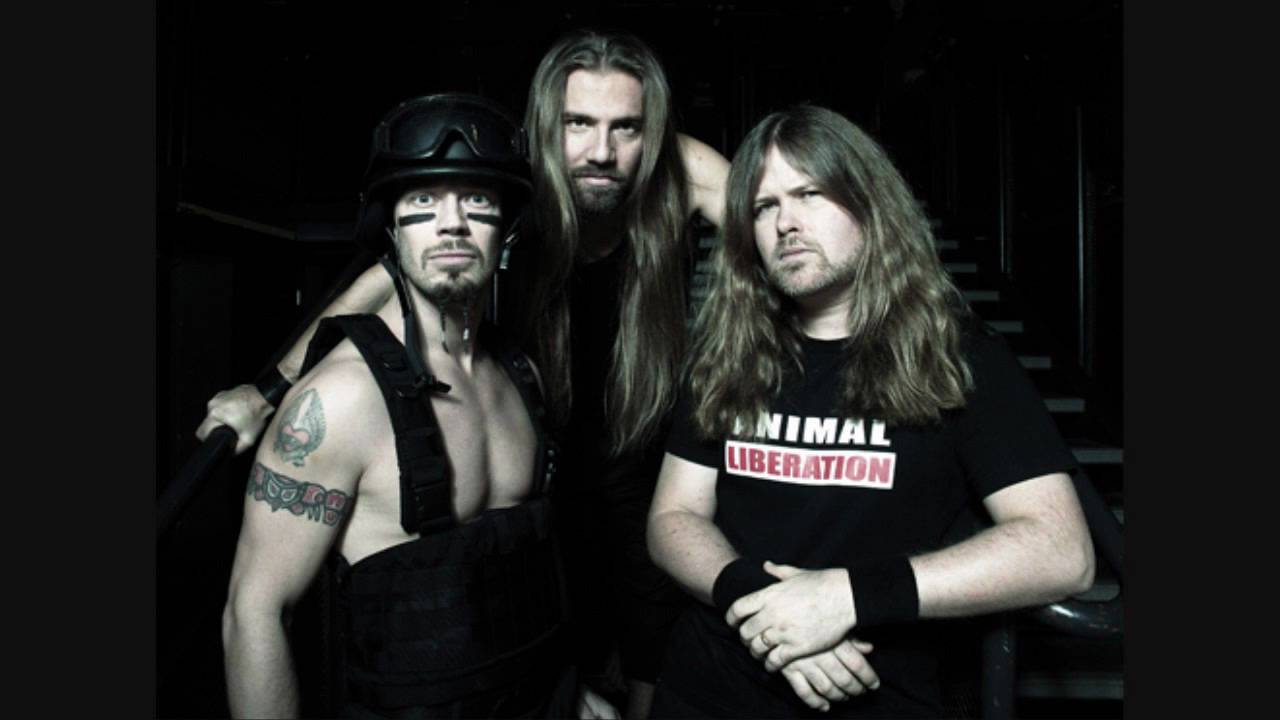 I discovered FK through something every musician hates: piracy. No, not the yarrrrr type; the other one. I had a pal who had much greater access to the internet in far greater speeds than I, and he had a vast mp3 library. This was during the late 1990’s, when it took about an hour before my infernal-sounding 33.6kbps modem could, triumphantly, announce the completion of a 4MB download of a shitty quality mp3. And if the song turn out to be a shitfest, well, there was much rejoicing: “wheee…” Anyway, this friend of mine took upon him the quest of providing me with CD’s full of mp3 music, for which I paid a small amount (but I totally got ripped, as did the CD’s…get it…hehe…hehe…OK.) This was during my prog/shred/neoclassical phase, with lots of Yngwie, SYMPHONY X, LIQUID TENSION EXPERIMENT, Allan Holdsworth etc, and on one of these compilations was an album called “Freak Guitar” by Mattias IA Eklundh.

I couldn’t really wrap my head around what I was hearing (turns out this is a very complicated yoga move and shouldn’t be attempted by mortals,) what with all the weird melodies, harmonics, jagged rhythms, humoristic and insane arrangements; but there was something absolutely mesmerizing there which made me return to it time and time again. In the best and most positive meaning of the word, the music was unique. In spite of all the moronic laughs and intellectual insanity, this shit was catchy as hell, and it had depth of the kind that signals that greatness is afoot. No, not a foot, you idiot, afoot. Buy a thesaurus, bitch.

After “Freak Guitar” I naturally turned my attention to Mr. Eklundh’s other exploits, and my dru…music dealer burnt me a copy of “Spanking Hour” on my next batch of totally legally acquired (acquiarrrrrrd?) music, and I was totally blown away. Why? Let me tell you a story…the story that will make you grow your own moustache. Yes, even you, ladies.

There are riffs. There are melodies. There are vocal phrases. There are choruses. And then there are hooks. Those things that weave in through your ears, sink into your brain, and refuse to let go. You’ve probably had songs on repeat in your Headio™ (the radio that plays inside your head. I should seriously trademark this expression,) so you know what I’m talking about. FREAK KITCHEN has got some mean fucking hooks that go on and on and on and on a long time after you’ve last heard the song. And when that stops, it’s replaced by another one of theirs. Listen to this, for example: there’s no way in hell you’re not humming to it after a few bars. Even though IA’s riffs and chops are usually quite complicated, the hooks are still extremely catchy and easy to get into. In fact, I don’t think they’ve done a chorus yet that doesn’t have huge sing-along potential. I and my wife constantly hum on bits and pieces of FREAK songs (both in and out of the kitchen) when doing chores, driving, picking our noses and whatnot. Freak Kitchen is easily in my Top 10 Catchiest Bands, all genres. Is there a style of music that hasn’t been used by IA and his cohorts? Funk, jazz, soul, pop, ballads, reggae, samba, folk (etc in absurdum), and all kinds of metal of course are some of the ingredients used in the FREAK KITCHEN, so it’s safe to say that monotony in terms of genres is not on the menu. What’s even more fantastic is the fact that the brave amalgamation of styles doesn’t produce a stew that sets off in all directions at once, but maintains that elusive red thread that binds it all together into a working whole. How? Fuck me and my goat if we know. (We don’t. (So don’t fuck us. (Thank you.))) Even though there’s no way of knowing what’ll happen next, you’ll still have no trouble recognizing what band you’re listening to. Listen to “Becky”, for example: have you ever heard a song that turns as fluently from a down-tuned thrash/aggro metal barrage into an Irish folk ballad in a major key? No. No, you haven’t. 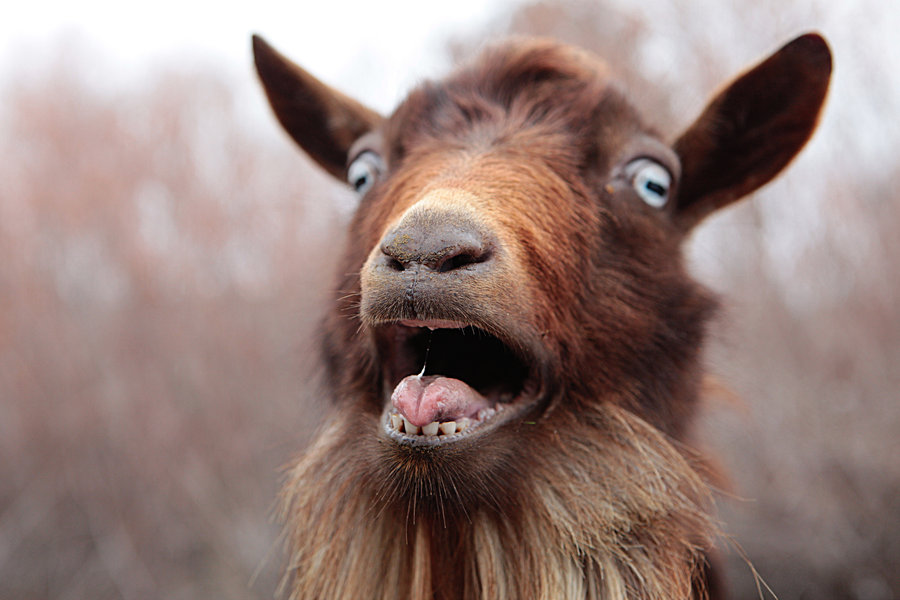 “Thank you for your cooperation.” -Goat

I’m usually more a music guy than a lyrics guy. Sometimes I don’t know what a song’s lyrics are about at all, even though I’ve heard it a thousand times and love it! But I also do enjoy the times when both expressions are perfectly in sync, and make the song greater than the sum of its parts. What I really like are lyrics that make you think, and that is a quality most of FREAK KITCHEN’s tunes possess. IA has a direct, sharp and sarcastic way of expressing himself through words, and isn’t afraid to attack whatever subject that might cross his path. Porn star parenting? Check. Neonazism? Check. Bands making unwarranted comebacks? Check. The sorry state of our materialistic and shallow society? Triple. Fucking. Check. Satire and social criticism is found aplenty.

On the other side of the coin, we’ve got lyrics that deal with personal relationships and feelings (ooohhh, headshot on the machismo!) that nicely contrast the sometimes bitter social commentary. “Seven Days in June” (divorce/custody), “OK” (anxiety/depression) and “Hollow” (loneliness) are just a couple of examples of songs with more emotional lyrical content, and this dynamic of coupling humoristic, aggressive and sarcastic tracks with more mellow, sensitive and delicate (dare I say deep) ones really rubs me the right way.

I’ll end the lyrics chapter with a couple of FREAK lines, taken from “Independent Way of Life”, which pokes fun at hipsters and other morons who have a slightly askew way of viewing individuality and anti-pack-mentality. Individualism by being different just for the sake of being different from other people, isn’t that an oxymoron? It has to be, the word has “moron” in it. If you care so much about what others think about you, maybe “independent” isn’t the way to describe you. The song also has a sweet twist at the end where the hypocrisy and shallowness of this way of thinking is revealed. Anyway: Have no identity / Have no personality / You wouldn’t notice me / Even if I stabbed you with a knife. And my favorite: I hardly ever sleep / Sleep is not considered deep. Gets me every time.

These dudes can play. They can fucking play the shit out of their instruments. And not only are they capable of doing that on an incredibly high technical level, they manage to harness those skills into expressional tools of musical identity, as every good musician should. Showing off for the sake of showing off is fun for the same reason watching track & field is fun – you marvel at the pushing of human limits and respect the insane amount of time the sportsmen and women have put into their craft. But there’s no artistic, aesthetic value there. For that, you need more. For that, you need – a moustache. IA always uses the phrase “grow your own moustache”, which means that you should cultivate your own style of playing as a musician. This is a great metaphor that I use with my guitar (and other) students.

Anyway, it’s safe to say that IA has done this more than most of us, as his way of playing is instantly recognizable. His phrasing, note choices and rhythms are very personal and non-conformistic. His use of harmonics is pretty quirky, and probably his strongest trademark as a guitarist. He’s also got great staccato licks, fluid legato runs, rhythmic tapping, fast picking – and everything played with immaculate precision, timing and clarity. His rhythm playing is very underrated; his chuggy riffage is thick and groovy, and his chordal work is very original regarding voicings and rhythms. And that voice…man, that voice. Husky and mellow, gritty and snappy, whispers and shouts, crooning and barking…and all this done while playing that complicated shit on guitar. The coordination skills are off the charts.

If you lose your drum sticks, use your hair

But let’s not forget the other knights of the round kitchen table! Drummer Björn Fryklund is a fucking monster. He lays down some absolutely mean grooves, and regardless of the complexity he makes your ass move in both possible and impossible ways. I’m amazed at how well he complements IA’s riffs and rhythms with his own shiznit, and it all sounds natural and unforced even in odd time signatures. Bassist Christer Örtefors provides a steady foundation, and also does lead vocals on select tracks. All three mesh really well with each other, and create a seamless overall sound that is both unique and effective. What’s not to love?

I have more beard than you

Heavier than your mom.

How to use a blues scale without sounding stale.

This riff could burst your spleen.

It’s fantastic how the FREAKs can break your face with brutal metal, spin your head with polymetric proggery, make your jaw hit the floor with instrumental equilibrism – and then just casually launch into the most heartfelt, deep and profound ballad that just takes your breath away. Take “Breathe”, for example. Beautiful, somber guitar arpeggios. IA croons about coping with a loved one’s departure from life: Time will heal, or so I’ve heard. A simplistic, delicate chorus with the song title repeated in a pleading manner: Breathe…breathe…breathe…just breathe… A restrained guitar solo, some vocal harmonies. Life goes on, or so I’ve heard. One last chorus: Breathe…breathe…breathe…just… The elegance is stunning.

Another great ballad is “Lisa”. A simple, clean yet sinister, guitar riff accompanies IA’s short vocal phrases, leaving loads of space and air into the arrangement and letting the silence speak. A mysterious atmosphere permeates the track, and the chorus is one of the catchiest of FK’s career – and that’s saying a lot. Another ballad favourite is “Broken Food”.

There are also mellow tracks of the more humouresque variety, like “A Regular Guy”. A pop song in a major key, contemplating the problems of being an un-macho male that likes Kafka more than beer and football, shouldn’t work on a record with mostly metal material, but these fuckers pull it off in stride. Big up. When in doubt, play guitar with a comb

Finally, the main reason why you should make FREAK KITCHEN a priority in your life is because they write and record awesome songs, and that’s all they do. 25 years and eight full-length albums into their career, they have yet to release a bad song. How many of your favourite bands have only released great albums? With only great songs? Didn’t think so.

Also, their live shows are always fun, energetic and tight. They are extremely humble and down-to-earth, and treat their fans like royalty. These guys are simply the bee’s knees, and you should worship them as your new gods. Besides Crom, of course. Now piss off and go buy some quality Swedish music!

PS. Rest assured that I have bought every single FREAK KITCHEN (and Freak Guitar) album on CD. Don’t pirate, bitch, if you ain’t gonna buy the real thing. DS.